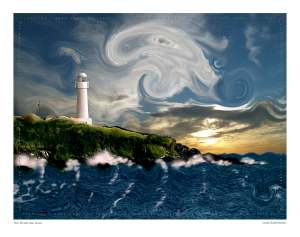 2 mediocre photos were used to produce this digital painting. The application used was Photoshop. I was thinking about the lighthouse keepers and the loneliness of their lives usually in isolated places and separated from their families and friends. The ferocity of the sea and the power of nature is very much in the news lately as these forces destroy the works of men.

The text which runs around the edge of the painting is as follows:

The howling gale
has forced the sea birds
down upon the tower
lonely and windswept
cylindrical with power
full of watchful nights
and card playing.

Nature is shown as contorted and angry, twisted into monstrous shapes while the Lighthouse is rigid, hard and resilient.

3 thoughts on “The Lighthouse and the Sea”