Do you remember the experiment, about 40 years ago, in cinematic projection which was called Cinerama. The recent efforts to introduce 3D in cinemas reminded me of this. Cinerama involved projecting the movie on a wide curved screen. 3 projectors were used, side by side, to produce the effect. Depending on where you were sitting in the cinema your entire vision was filled with the screen image. This, of course, was the problem – where you were sitting. Very few of those in the cinema got the full effect. If you were to the side of centre the screen was distorted. Why somebody didn’t think of this before the millions were spent converting cinemas and producing films for same, is a mystery. Of course the whole project was abandoned after a few years. I wonder will the same happen with 3D.

We were in Glenbeigh, a few years ago, looking north across the bay towards the Dingle Peninsula. The vastness of the scene reminded me of a Cinerama scene. Of course I took loads of photos but none captured the scene the way I would have liked. It needed a Cinerama treatment. The above photo was the result of my ‘experiment’ (Click on the photo to enlarge it). 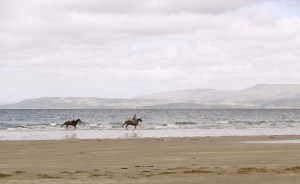 This was the original photo with a Photoshop ‘Watercolour’ filter applied. By sampling the image I painted in the extra width rather than stretching the scene. When printed at about 4 feet wide it looks good as the ‘curved’ effect gives the feeling of been in the scene.

(Printed on an Epson Stylus Pro 9600 on matt paper)