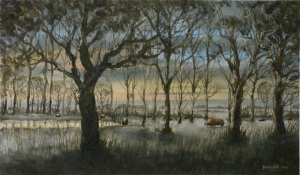 Cattle in the mist

There are 2 basic rules in oil painting, paint from dark to light and paint the most distant objects first. These have to be regarded as general principals, for in practice, sometimes they’re contradictory and don’t make sense. In this painting, the rules are followed, in general, and broken in specific areas. For example, the lightest part of the painting is the sky, so this should be painted last to obey rule 1. But the sky is also the furthest part of the landscape so it should be painted first, to obey rule 2.

If we look at the painting of the sky, the last parts painted in were the dark clouds. Similarly, the last parts to be added in mid and foreground areas were the dark trees. What about dark colours before light? What about the rules? When I was learning to paint this would always bother me. I liked guidelines to follow and how I finally came to terms with this issue was as follows. The furthest away items are painted first, dark to light. Whether it’s clouds, trees, people in the landscape, paint the dark colours first. Moving towards the viewer each area is completed, dark to light. So the reason the dark clouds and the dark trees were painted last is because they were closer to the viewer. Both of these items were almost silhouetted so there were no later light bits to be added. If the entire sky is taken as the ultimate furthest part within the scene it make sense to paint it to completion first, darks to lights, finishing at the horizon, the nearest part of the ‘sky bit’ (see sky painting here).

The video might explain it better, here it is.