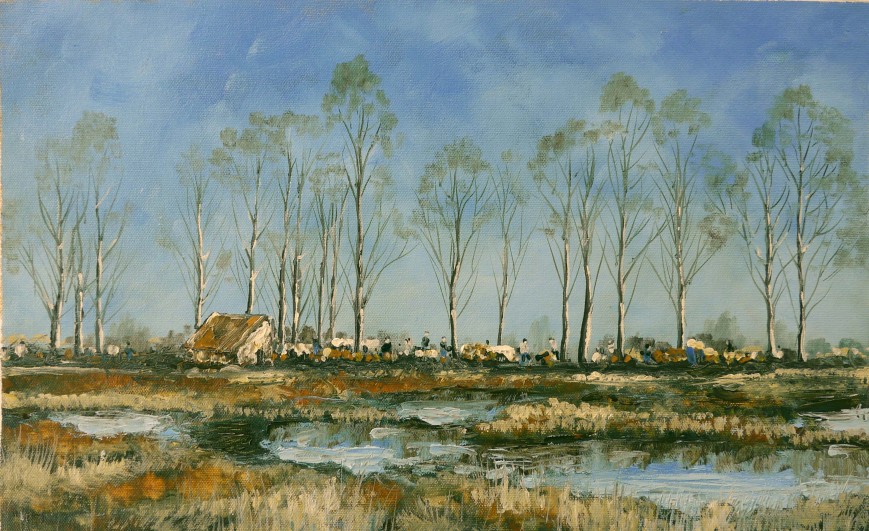 It is thought now that Irish boglands are not natural. Apparently the first settlers in Ireland were farmers (8,000 BC). At that time Ireland was covered in oak forests and the settlers set about clearing the land for agriculture. As the trees were removed an environmental catastrophe occurred. Bogland began to grow and spread covering large areas of agricultural land. In an area of North Mayo, stone-age settlements and field systems were uncovered when the turf was removed. The turf was used as a source of fuel over the centuries and turf cutting is still carried on in bogland areas. The chemical process which is responsible for the growth of the bogs produces an acidic environment. Its corrosive and machinery rusts quickly. Other items, like fencing, are bleached white. At this time of year the cutting is finished and the workers are busy collecting the sods which were cut and dried during the summer and autumn.

The photo above does not do justice to the brilliance of the colours in this painting. The paints used are exactly the same as used in previous paintings (Burnt Sienna, Yellow Ochre, Prussian and Cerulean Blues, Raw Umber and Black and white) but the difference is I did NOT use Liquin. I have heard other painters saying they thought Liquin tended to dull the colours. Maybe its the particular scene, but these colours are glowing. Its years since I used Linseed Oil on its own but after a few minutes using it, I remembered why I began to introduce Liquin into the medium. The oil is ‘greasy’. It slips and slides all over the place. Placing a layer on top of a wet layer containing oil is nearly impossible. As you will see in the video (next post), trying to get a layer of ‘rust’ red onto the roof of the shed was like trying to butter hot toast.

I also used a painting knife quite a lot in this painting. It helped with the difficult handling due to the Linseed Oil. I would still recommend Liquin for beginners. The ease of use counteracts the ‘possible’ dulling of the colours. Further to this, I dug out a painting I did a few months ago which was a ‘Liquin only’ painting and needed to be ‘oiled out‘. I ‘oiled out’ this painting with a mixture of Linseed Oil and White Spirits (50/50). The colours were more brilliant, after the oiling with this mixture, than they would have been using Liquin. This is the recommended practice before varnishing but it will take weeks to dry and months for this to be ready for varnishing. For me, it might be worth it.

Check back in a couple of days for more on this painting and the time-lapse video of the process.