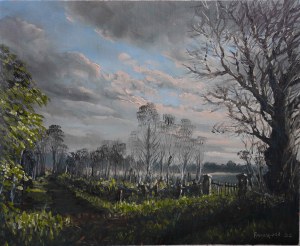 This painting did not turn out as planned. The plan was to have a scene of a much earlier time in the morning, when everything is shades of blue with highlights of pink. The colours of the sky gives an idea of how the entire painting would have looked. It was the accidental ‘shaft of light’ (8:40 on video) which gave me the idea of more colour, less fog, more light – a later time in the morning. It was at the point when I was painting-in the mid blue/grey on top of the dark brown underpainting. I will paint the original plan in the near future, in the meantime its on the back burner.

The lesson to be learned here is to be an opportunist. Nowhere is this more important than in the painting of the sky. To paint a sky in a landscape, which is unique and not a ‘formula’ sky, means being constantly watchful for accidental occurrences which can be developed. Of course there is a plan before you begin, otherwise you would not start.

When it comes to the ground part of the landscape the same watchfulness applies. To create the conditions to allow major alterations to be made requires creating the entire landscape, starting at the horizon and moving towards the viewer. The comment is often made that I spend so much time painting a part of the painting which is later covered. The reason is that I have the option of not over painting if I decide the painting is better without this addition. A bit like an insurance policy, just in case. The underpainting will often have to be scraped off to permit the later additions but this is not always the case. In this painting the sky was scraped off for the large tree on the right but not the tree on the left.

Here is the video of the painting process. The colour balance on the video, this time, is not as accurate as it should have been. I think it has something to do with artificial light used while making the video. The photo above was taken in daylight and is closer to the actual colour. There is more information about this painting in a previous post (here).