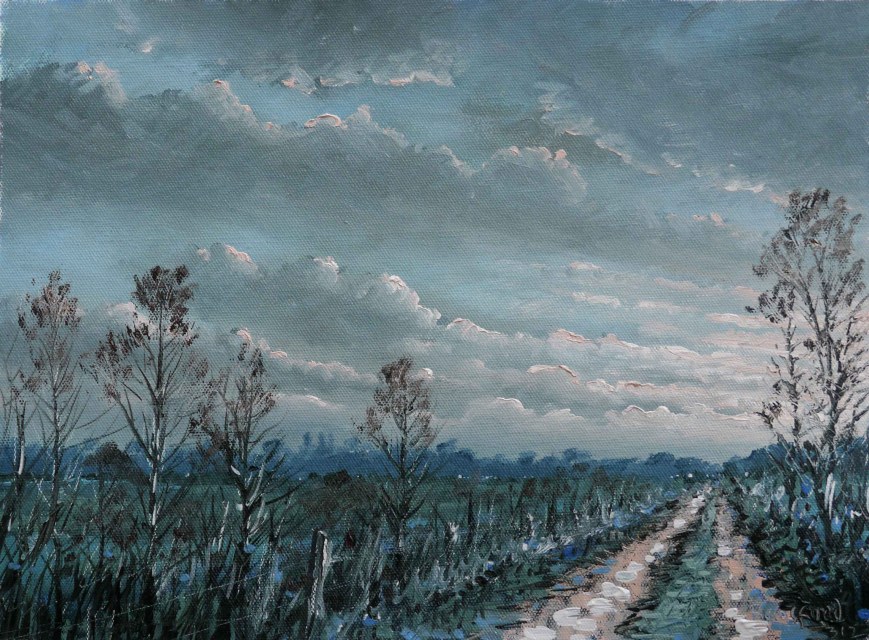 These are the colours I was intending to use on the “Daybreak” painting but there was a change of plan. There is a similarity in the sky in both paintings. The difference is in the addition of green in the sky mixes in this painting. The plan was to restrict the range of colours in keeping with daybreak. Pink and blue dominate the scene. Green is everywhere, but nowhere to be seen as pure green. Its in the under painting and the mixes and it helps to tie the painting together. With such a large expanse of sky and very little ‘crossover’ this is important. By ‘crossover’ I mean trees which start in the ground area and flood into the sky giving an area where ground colours and sky colours co-exist. Water on the ground, reflecting sky colour is also a ‘crossover’ area, as part of the sky is seen on the ground.

The colours used were: Burnt Sienna (red), Yellow Ochre (yellow) and Ultramarine (blue). Viridian Green, black and white were also used. The resultant blues, because of the Viridian, are ‘turquoise’ and look great with the pinks (white with a small amount of Burnt Sienna). Photography really does not do justice to the brilliance and luminance of oil colours when seen ‘in the flesh’. Yesterday I ‘oiled out’ the last 8 paintings produced and it was like my old friends returning from the gloom. ‘Oiling out’ is critical to return a painting to look as it did when freshly painted. See “For the absolute beginner, part 3 – the finished painting” for more information on ‘Oiling out’.

On the subject of photography and paintings, I had a bit of a revelation regarding photographing and videoing paintings. The last painting video had a distinct lack of red in the colour balance when compared to a photograph of the same painting taken in daylight. What I was doing was taking a white balance reading on the blank canvas before I started to paint. This is a blank ‘white’ canvas, or so I thought. When compared to white paper it was decidedly cream in colour. Its amazing how easily the eye is deceived in something as simple as this and so sharp in other ways. Anyway, cream is a mix of yellow and red. I know this from mixing inks in my ‘day job’. About 15-20% red added to yellow and diluted with white produces cream colour. By setting the colour balance to white for the cream coloured canvas, I was telling the camera to disregard a certain amount of red and yellow as being caused by lighting conditions. Of course the subtle shades of pink, with its tiny amounts of red, were then not ‘seen’ by the camera. The photograph, taken at midday with the white balance at ‘auto’, was more accurate, as the camera manufacturers would base their settings on midday lighting as a standard.

I haven’t looked at the video footage yet, hopefully its more accurate than previous attempts. I will have it ready for posting in a few days. See you then.

Leave a Reply to Elizabeth B. Cancel reply