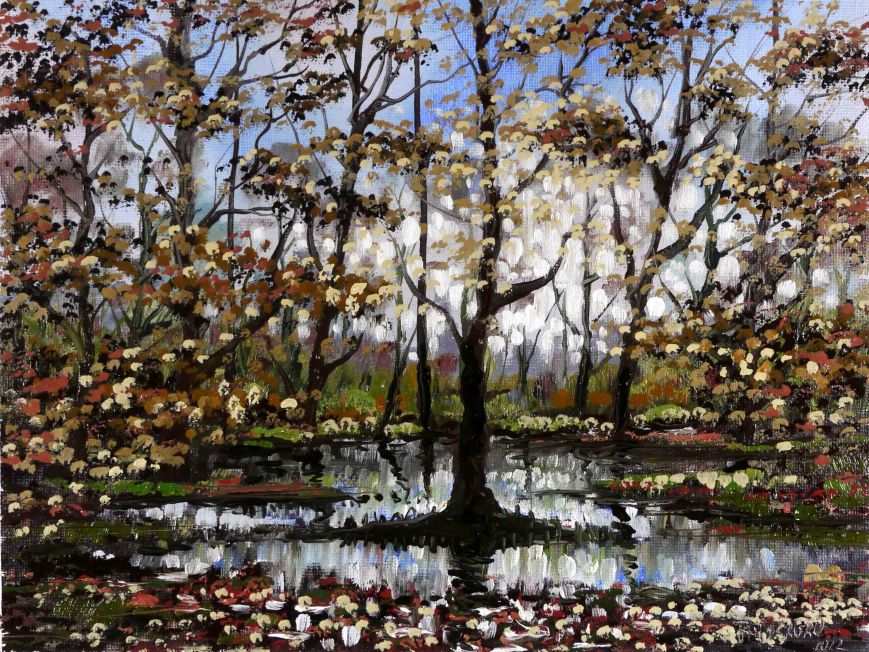 I’m back in the woods again. The colour is cool in spite of the rich red colours. This little pond will attract wild duck over winter. Their silhouettes against the moon lit evening skies as they explode into flight will be a feature of this part of the woods. Now its quiet and still.

This is a mixture of very wet solvent painting and a dry brush technique. There is no particular part of the painting devoted to either method. Initially, the underpainting was solvent saturated, this was allowed to evaporate and in the sky, dry paint was rubbed in to pick up some of the under colour. I’m making a conscious effort not to spend so much time painting parts of the painting which will be covered up later. I’ve noticed that I tend to do this without thinking, I’m ‘constructing’ the landscape, putting in the parts I know are there, even though they won’t be seen in the final painting. In alla prima this volume of wet paint under what is later painted over can cause problems, especially if there are shadows to be painted in. The problem, as usual, is with the white paint in the mixes used to convey distance in the landscape.

Traditionally, solvent rich paint was usually placed first in standard oil painting. This is important if the painting is painted in layers, each one allowed to dry before the next is applied. Oily layers under solvent layers can cause cracking as the painting dries. As there is a single layer in alla prima this is not a concern and the reason for solvent under layers here, has more to do with reducing contamination from the under layer as ‘wet on wet’ is applied.

I’m still not using medium, only solvent. Maybe its my imagination, but recently bought tubes of paint seem to be ‘wetter’ than those of a few years ago. This would mean less expensive pigment and more inexpensive medium in the tube. All I can say is, I’m finding paint is handling quite well without adding medium. In fact, I’ve recently had to soak up excess medium from a newly acquired tube of paint (see here). The colours used are Indian Red, Yellow Ochre, French Ultramarine Blue, plus a little Sap Green.

I will post the video of the process in a day or two. See you then.