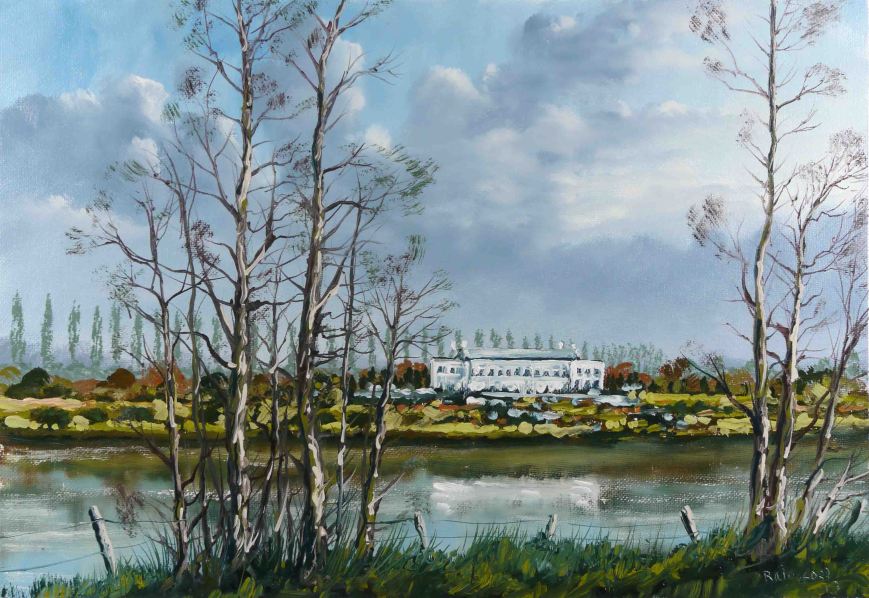 “Bert House was built between 1720 and 1730 for Captain William Burgh who was Comptroller and Accountant General for Ireland to a design prepared by his brother Thomas Burgh of Oldtown. Thomas was Barrack Overseer in Ireland, a position to which he was appointed in 1701 and was responsible for the building of Trinity College Library, Dr. Steevens Hospital, Dublin and Collins Barracks in Dublin. The latter building is now part of the National Museum of Ireland. The original Bert House consisted of a central block of seven bays, three storey high over a basement. The overlapping side wings were added early in the 19th century. It’s a house steeped in history and the people who lived in Bert House figured prominently in Irish history at various times.” This is an extract of an interesting article written by historian, Frank Taaffe, as part of his Eye on the Past series.

Its still an impressive mansion on the bank of the River Barrow a few miles north of where I live. I’ve included a photo I took some time ago. In the photo the river is hidden by the line of trees in the middle distance. From the viewpoint I used in the painting, the house is obscured by trees on the river bank. So this painting is a combination of the two viewpoints, probably how the scene would have looked in former times when the grounds were managed in keeping with such a grand estate.

In the last post I mentioned the problems with using a single strong colour in a limited palette of three or four colours. In this painting I’ve used three very strong colours, Alizarin Crimson, Cadmium Yellow and Prussian Blue. There are none of the problems of any one single colour dominating the painting as in recent paintings. This is achieved by using all three in every single colour mixed. Most of the mixing is on the palette with some mixing produced by blending colours together (as in the sky). Another way of ensuring all three are in the applied paint was by using the same brush repeatedly without removing the previous paint. In this case a ‘filbert’ No. 8 (three quarters of an inch wide). Of course mixing equal quantities of all three produces a grey (as in the clouds), so for example, when a green was needed the crimson was reduced but not eliminated completely.

The video will be ready to post in a few days, see you then.