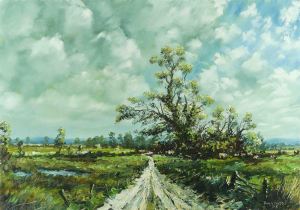 Prelude to a Storm

Colour can create atmosphere and I was trying to convey that pre-storm mugginess in this painting. There are no clean clear colours especially in the sky. Its a little bit tricky as a disastrous mess is never too far away. As you will see in this video I placed quite a lot of green (Sap Green) straight from the tube into the sky area. The next hour was spent gradually bringing this back to an acceptable sky colour. Once this was reached I progressed to the painting of the lower part of the painting. The same four colours, used in the sky, were used, but the proportions of each were different of course.

In conveying an atmosphere or feeling in a painting, apart from colour, the composition can help in a less dramatic way. This composition does not follow the classical rules. There is a knife edge balance. If we view this layout in purely abstract terms the shapes are balanced on the point of the triangle formed by the road. Its a bit like a see-saw, as the different elements are placed on one side of the fulcrum, the balance is upset and has to be restored by placing something on the other side. There were several times, in the early stages of the painting process, when the balance was completely askew. Before the leaning branch of the tree was painted was one such occasion. So you have to flit around the the entire surface, not concentrating too much on one particular area in case its pushed so far the balance cannot be restored. The end result is an ‘unease’ in the landscape which is the point of the painting.

Here is the video of the painting process. See you soon.