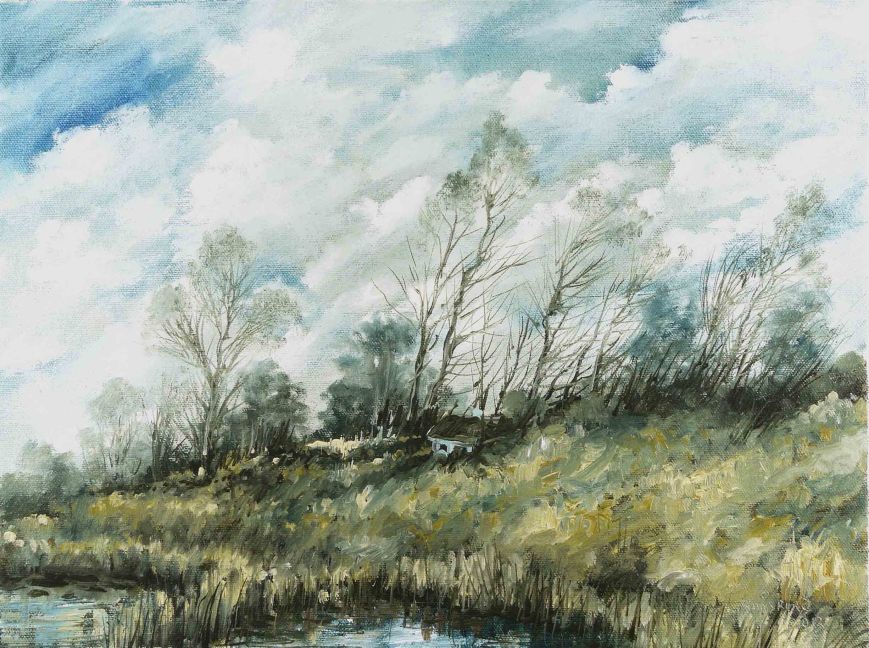 This canvas has a rougher texture than I normally use. In some ways this makes painting easier, especially if you want a loose textured look. Although with a lot of brushing very soft effects can be produced.

In the sky here, there is a fluffy softness. It took a bit of brushing and blending but I stopped in time to retain a textured look. There is a longer transition between rough and smooth and this allows more control over this gradual change. On a smoother surface a few extra brush strokes can obliterate your carefully painted clouds.

The previous painting (here) was painted in a similar way to this, on a less textured canvas, resulting in a smooth film of paint. The cloud details were painted last. In the above, details were placed early on and even after a fair bit of blending they were there at the end.

Notice the contrast between the distant trees and the foreground. Working the paint into the canvas gave a cloud-like softness in distant trees. Mid and foreground shapes are just placed brush strokes. At a point near the end of the painting I thought this ‘roughness’ was a little too severe so I softened the hard edges to match the look of the sky.

3 colours were used again, exactly the same as the last painting (Raw Sienna, Raw Umber and Prussian Blue plus white and no black). The size is 16″ x 12″ and took about an hour and a half to complete.

Here’s the video, see you soon.