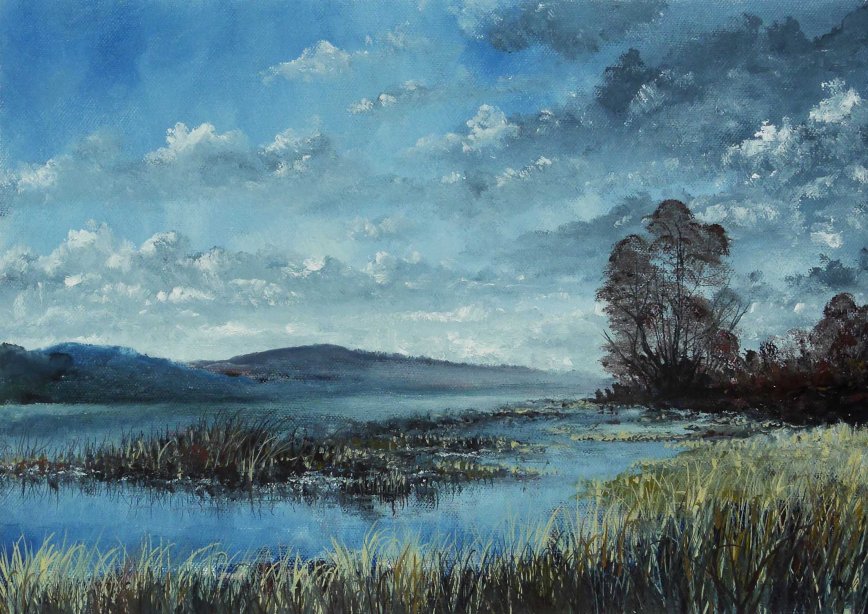 Although chilly and dry there are still areas under water from the previous wet months. The dampness and low temperatures results in fog-like mists more often seen in the late autumn.

Prussian Blue is a strong transparent paint. In the limited palette of 3 colours, where this blue is the only blue, a strong red or yellow is needed to control its tinting power. In this subject the overpowering blue was just right for this early morning scene in spite of the strong red. The strong red in this case is Indian Red, a rust colour similar to Burnt Sienna, but not a good mixer. By this I mean that as its added to blue it will change quickly to a black/purple, difficult to control. If placed as an under layer and the other colours painted on top (wet on wet) its easier to control the colour change. For example, the distant hill, in the centre of the painting, has a reddish tinge because of the under layer of red. Too much brush work will result in either the red being absorbed, or else dominating the colour to become a rusty blob. This is dependent on the amount of red initially applied.

3 colours (Yellow Ochre, Indian Red, Prussian Blue) plus black and white. There is no medium used, only White Spirits. The painting is 16″ x 11″ and was painted in a single ‘wet on wet’ session in under 2 hours.