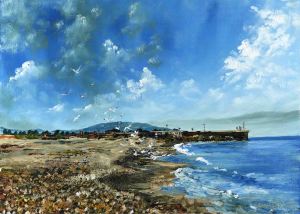 In recent paintings I’ve been using a knife to suggest details. The sort of detail it would be impossible to paint with a brush. The surprising thing is that the context and the bits of paint supplies clues and the viewer fills in the missing bits.

This worked well for me in the painting of the people on the pier. To illustrate what I mean I’ve included a very much enlarged detail from this painting. I placed silhouetted shapes and the context suggests the shapes are people, because you expect people, you see people.

I think that the resultant images are more strikingly real than a meticulously painted figure. I proves that there is nothing more powerful than the imagination.

On the subject of the power of the imagination, another point of interest here is the brilliance of the blue of the sky and sea. This is pure Prussian Blue and white, laid down before later colour mixes were added on top. In the entire painting there are only four colours used, and in the foreground all of these were used. Some were blended and some placed as pure colour which mixed with what was already there. This reduced the brilliance of these colours, further emphasising the chroma of the pure blue colour. What is seen is brilliant blue, not Prussian, which after all, is not a precise colour match of sky blue. Your imagination sees this as seaside sky colour in a similar way to how you see the family group out for a stroll on the pier.

Here is the video of the painting process and see how easy it was to suggest the figures using the point of a knife.

The weather here is great at the moment. A mixture of intense sunshine and showers. The sort of weather which makes the garden scream for attention and so painting is put on hold for a few days. The sun sets here at 10 pm and darkness falls at about 11 pm. I managed a 2 hour painting after sunset and here it is. Its 14″x10″, the colours are limited as usual, Yellow Ochre, Burnt Sienna, Raw Umber and Prussian Blue. As the painting has a rough look to it, when it came to painting the birds I had to resist being too careful with these, as to keep the rough look throughout.

I will post the painting video in a day or two. See you then.